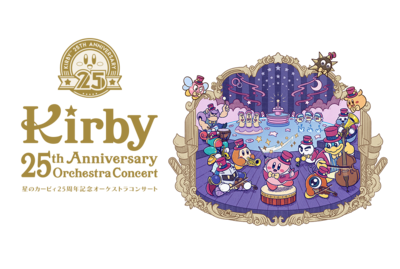 The Kirby 25th Anniversary Orchestra Concert was a series of concerts performed by the Tokyo Philharmonic Orchestra and held across Japan in the year 2017 to celebrate the 25th anniversary of the Kirby series. A live recording of the second concert - along with a second set of bonus tracks - was then released as a two-CD + DVD/Blu-ray set in Japan only on December 20th, 2017. The digital versions of the CDs were released internationally on June 26th, 2018.

The concert arrangements were written by Shogo Sakai and Megumi Ohara, and were conducted by Taizo Takemoto, except for the "Kirby Air Ride Medley", which was conducted by Sakai.

Both concerts featured - in addition to the orchestra - a video display which showed gameplay snippets from the games the music was taken from and commentary in-between performances by the staff. 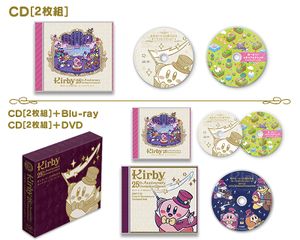 A collage of every item available as part of the Kirby 25th Orchestra Concert CD and video set. Includes jewel case and the two CDs, and either a DVD or Blu-Ray disk containing video of the concerts.

On December 20th, 2017 - the Kirby 25th Anniversary Orchestra Concert was released as a 2-CD set for purchase in Japan only. The first disk, Kirby 25th Anniversary Orchestra Concert, consists of the full suite as performed in the concert. The second disk, Kirby Memorial Arrangements, consists of bonus music and orchestrations which were not part of the concert proper.

The digital versions of the CDs were released internationally on June 26th, 2018, available on several music streaming services.

All tracks arranged by Shogo Sakai except for the "King Dedede & Meta Knight Medley" and the "Kirby Ball Medley", arranged by Megumi Ohara.

The Blu-ray and DVD release includes a video recording of the concert with chapter selection for each song and a multi-angle feature, which allows for switching between the pre-recorded game footage and the live concert footage. Additionally, the commentary between songs is included, but not mentioned on the packaging or on the menu screen. The concert footage begins automatically when the disc is inserted, and the menu screen is only available once the concert ends or if the MENU button is pressed.